Corporate Social Responsibility: On the Iron Range and Beyond

If you’ve ever been to Huntington Bank Stadium, a Carlson School of Management classroom, or the Best Buy Theater on campus, you’ve been a beneficiary of Corporate Social Responsibility (CSR). CSR describes the many ways that corporations build relationships with their communities and employees through things like philanthropy, employee volunteerism, giving to local non-profit organizations, and more. In fact, Minnesota has one of the highest concentrations of corporate headquarters in the nation, which means that Minnesota is a great place for researchers and academics to study the relationships between corporations and society.

Through her research, Hubbard School of Journalism and Mass Communication Associate Professor Amy O’Connor is interested in understanding how CSR is showing up in the lives of Minnesota mining workers. O’Connor is particularly interested in how CSR is shaped by the interdependence of corporations, communities, and workers. “One of the things that I think is interesting is asking ‘what are the responsibilities of corporations to the commons and how do they enact those? What does that look like for people who live in those communities? How does that shift our understanding of what corporations should be or are?,” she said.

The trend toward CSR began in the 1980s with Ronald Reagan’s push for corporations to take responsibility for services and support that were previously government domain. “Now, CSR is an expectation that people have for corporations,” O’Connor said. Beyond the basics like providing workers with health care, corporations are expected to participate in a range of activities from philanthropy to brand activism in an effort to demonstrate their fit within society and maintain their social license to operate.

However, according to O’Connor, there is still a lot about CSR that researchers don’t understand yet. “Beyond things like philanthropy and brand activism, we’re still learning a lot about what [CSR] looks like in local places.” O’Connor’s research attempts to fill in some of the gaps and explore CSR at a local scale.

CSR on the Iron Range
O’Connor is excited about her latest study because it will be the first look at CSR in an industry that has rarely been studied in the US context. “I’m excited that this will be the first ethnographic account of CSR in the US mining industry,” she said. The research involves interviewing Hibbing Taconite miners and community members to understand their experiences and expectations about the company’s CSR efforts.

One might think that CSR is always a positive for the communities that corporations serve, but in fact, it is often much more nuanced. O’Connor’s research has found that CSR in mining communities isn’t always straightforward, and involves paradoxes between what CSR promises, and what workers experience. “Some of the paradoxes I have found include safe production, diversification, and longevity within a finite resource,” she said.

Just like any corporation, mining companies have their own unique struggles in maintaining a good reputation, like ensuring the safety of their unionized employees and navigating an industry that relies on resources that are quickly depleting and may be completely gone within the next few years. However, Cleveland Cliffs, the managing owner of the Hibbing Taconite mine, has also been doing a lot of positive things for the community. “Mining companies are helping to build new additions to local schools, parks, and daycares. They’re a reliable partner for local nonprofits and contribute to the community's overall quality of life through taxes, employment, and other donations” O’Connor said.

O’Connor also hopes that the research will be especially insightful for Minnesotans. “Mining communities are particularly interesting to me because of their impact on the state of Minnesota,” she said. “Many people don’t know about the mining that happens in northern Minnesota, or they have outdated examples of what mining is.” By sharing the stories of miners, O’Connor hopes to share the story of a region that has historically been misunderstood.

“I am very grateful to the miners and community members that have been willing to let me into their lives and tell their stories…This research goes beyond the stereotypes of mining in Minnesota and hopefully tells a more detailed and nuanced story,” she said. 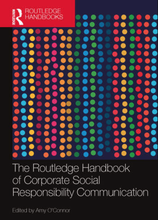 Creating a CSR Handbook
But O’Connor wasn’t always looking at CSR from an academic lens. Her interest in CSR began during her eight years in the advertising and public relations field. “I had always been interested in the relationship between corporations and society,” she said.

Now, in addition to her research into mining communities, O’Connor is contributing her own knowledge and academic expertise in the creation of The Routledge Handbook on Corporate Social Responsibility and Communication, which engages current literature on CSR and offers bold and exciting directions for future research. “I contributed two chapters, recruited authors from 15 countries and 36 universities to write chapters, and edited the book in its entirety,” she said.

The book is designed for both novices and experts to gain a better understanding of CSR and covers topics like theoretical underpinnings, the form and content of CSR messaging, and tensions associated with CSR communication. It is now available for students, faculty, and researchers to use in their academic studies nationwide. 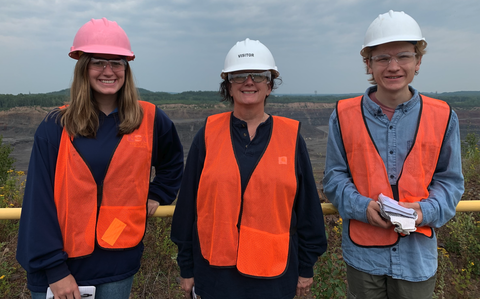