Why I Give: Neota and John Bradley

The Bradleys want to help students achieve their dreams.

Neota Bradley (B.A. ’74) came of age in journalism against the backdrop of Watergate, maybe halcyon days of being a reporter, which came with equal parts danger and respect. She recalled an early professor warning against the wages and sometimes gritty outlook. “He went on and on, and then he asked how many of us would like to proceed,” she said. “Every hand went up.”

After a job at the Lutheran Brotherhood in downtown Minneapolis, Bradley packed up her skinny reporter’s notebook and pen and moved to Hibbing, first as a secretary, then as a reporter at the Hibbing Daily Tribune.

“It was the only time I was a news reporter,” she said. “About two years on a small daily, so I don’t have the career most people have probably had. But I realized that degree and the years doing it changed or enhanced my entire life. How I see things. How I question things. How I listen. I think everybody should take a journalism class, [because it is] a prerequisite to learning to listen and to look people in the eye. Then write it down and make the connection.”

Her career took a variety of vibrant turns: Founding a PR firm, in various roles (but never as reporter) at the San Francisco Chronicle, a copywriter, a travel agent, a tour guide leader, estate sale manager, driver at a Lincoln car dealership, an art gallery manager and director of the San Diego Watercolor Society. But Bradley said the common denominator to her success was her journalism education. And it felt like there was something more to do with it, to honor it.

She was moved after reading the thank-you letters a friend got when he donated to his alma mater. Then her husband, John Bradley, donated to his—“Michigan State, unfortunately,” she joked, while he’s in earshot. That sparked something.

“I don’t want to say it sparked joy, because that feels trite and trendy,” she said. “But I realized I can’t imagine someone wanting to do what I did and not being able to do it. Fifty years ago, college was cheaper compared to what you earned. I could afford it with a part-time job. I didn’t know anyone who had a loan. You lived in cruddy places or at home, but you could do it.”

She also thought about her childhood dreams of being a writer. “I thought, wouldn’t that be awful, if since you were eight, you wanted to do something, and you get that far and you’re clever enough to do it and you have the drive and you just can’t do it? Wait a minute!”

The Bradleys don’t have children. “We decided someone’s gotta get something when we die, and we should have fun saying who gets it,” she said. Thus, The Neota Johnson Bradley Journalism Scholarship was born, which will provide financial support to journalism students, preferably those pursuing a career in print. It may be renewable depending on the student and their progress toward a degree. Her designating a preference for students who intend to work in print reflects her lifelong engagement with, and love for, the materiality of print, and her belief in its eternal contemporaneity—notwithstanding the rapidly evolving world of digital media. “I believe it will make a comeback,” she said.

“It makes me so excited and so happy in the way nothing has for a long time,” she said, especially contrasted against the bleak backdrop of the global pandemic. “I get so excited thinking that someone will have a chance that I took for granted to keep on going because of what it’s meant to me in my life.”

Far from done, she said she’s experiencing a revival of writing and editing and creativity, now at the age of 68.

“But it’s good to reflect. I think a lot of people who have potential for giving back aren’t thinking about looking back just yet, because none of us are ‘done.’ But you have to consider it should be carried on. I ‘had fun, fun, fun,’ like the Beach Boys sang. And life is good, but it’s different now. Somebody else out there should be doing what I got to do. And more.”

Give to the Hubbard School. 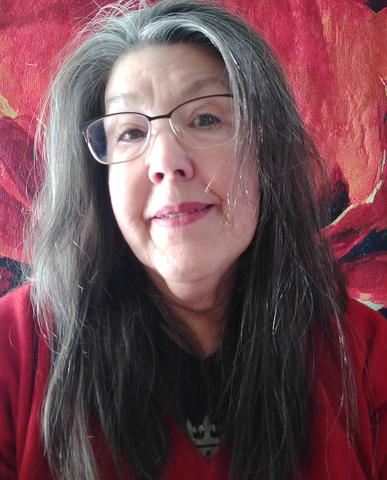