Where Have All the Newspapers Gone?

Newspapers cover the big events of our time.

Newspaper organizations, both with large daily circulations in metropolitan communities and with weekly editions for small, rural areas, print the first draft of history. Newspapers cover historic national moments, like Joe Biden’s election victory (and later confirmation) or the recent insurrection of the United States Capitol Building. Newspapers also cover moments that are significant only to their individual localities. Newspapers, though, are more than just the big type, big hype and big moments.

Unfortunately, more and more communities are losing their newspapers. We’ve seen it across the country, including in Minneapolis. After more than 30 years of service to its area, the Southwest Journal shuttered in late 2020. According to Poynter, it was one of at least 60 newspapers that closed in 2020, financially gutted by the global coronavirus pandemic. Since 2004, more than 2,000 newspapers have shuttered, according to a team of researchers at the University of North Carolina. About 400 of those closures occurred in rural areas. These closures, especially those in rural areas, often lead to “news deserts,” areas of the country without a daily or weekly newspaper.

I recently published a research project in Journalism based inside a news desert, interviewing the abandoned former readers of the weekly Caroline Progress in rural Caroline County, Va. The goal of the project was to show the importance of a newspaper through the absence of a newspaper. As a longtime former journalist and current journalism studies researcher, the findings left me both heartbroken and hopeful.

The research project demonstrated the dire financial state of the newspaper industry is real. It also showed the desire for the product is real. The findings show residents need their newspaper. It was “the heart and soul of the community,” one person told me.

Allow me to tell you one quick story from Caroline County. The 29th annual Harvest Festival packed the streets of county seat Bowling Green on the third Saturday in October 2018. The normal, tranquil community of about 1,100 teemed with nearly 15,000 people. The narrow downtown Main Street overflowed with vendors, exhibits and excitement. For residents of Caroline County, the Harvest Festival is the can’t-miss event of the year. One resident, though, missed it in 2018, and he blamed the Caroline Progress. Actually, he blamed the lack of the Caroline Progress, which, after 99 years of service to the county, shuttered in March 2018.

“I forgot about it,” the 10-year resident of the county told me of the festival. “I had gone in previous years and really enjoyed it. I would have gone. I would have looked forward to going. But it wasn’t in front of me. I didn’t see it in the paper.”

Yes, newspapers play a critical function in democracy, providing needed civic information. Yes, they provide the necessary link between a community’s government and its residents. But newspapers do much more than that. They remind us of the Harvest Festivals of the world.

A newspaper supports, strengthens and breathes life into its community.

“I think there is a loss of the quality of life, with people not being as close because you don’t have the paper,” another Caroline County resident told me.

Private Facebook groups dedicated to the interests of Caroline County sprouted. But the readers I talked to lamented the lack of control on those pages. There’s no true editor. Really, there is no trust in those pages. And the readers of this rural county newspaper trusted their community newspaper.

Without newspaper reporters in town, residents must act as reporters themselves, visiting dozens of different websites and social media accounts to gather information they need. That takes time, energy and work.

“Life is harder in Caroline County without the Caroline Progress,” one person poignantly told me.

Life is lonelier without the newspaper, too. Without important event notifications, the community does not come together as it once did, even with some residents missing the biggest events of the year. “I am more isolated now,” a resident said. “I think we all are. I think the newspaper was the one thing that kept us together.”

My research was a case study of a small, rural county. It details just one news desert, one community that lost its newspaper. My fear is that this report represents a growing number of communities across the United States.

Nick Mathews is a second-year doctoral student at the Hubbard School. He previously earned his undergraduate degree and master’s degree from the University of Missouri. His research interests are in journalism studies, specifically exploring media in rural spaces. He has presented research at global conferences, including the International Communication Association (ICA) and the Association for education in Journalism and Mass Communications (AEJMC). He has earned three top-student paper awards. He previously taught as an adjunct professor at James Madison University. Nick had a 20-year professional journalism career, including time as a senior editor at the Houston Chronicle and time as a regional editor-in-chief, overseeing the news operations of three daily newspapers and three weekly newspapers in Central Virginia. 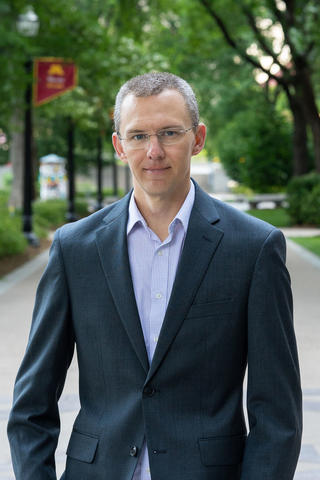