The first-gen graduate has been on the scene of major city-news flashpoints, bringing the news to televisions everywhere; now he's training the next generation.

On May 26, 2020, 31-year-old WCCO photojournalist Dymanh Chhoun (B.A. ’11) found himself waiting out a potential threat of violence and crowd panic in the aftermath of what sounded like a gunshot near the South Minneapolis grocery store Cup Foods, and coincidentally, the home of a former high school football teammate.

That morning he had kissed his wife and two kids goodbye, saying, “I love you honey, I think this is going to be big.”

Nerves were frayed. The day before, George Floyd had been killed while in custody of Minneapolis police. Community grieving and protests had begun. As he waited, Chhoun struck up a conversation with his former teammate, whose girlfriend was able to give him footage and soundbites from her cell phone.   “Many stations didn’t have people out there—it was too scary. They had to make a lot of hard ethical decisions. But I told my news director, ‘This is my place. This is my Target. My Cup Foods. This is history, and I need to be out here capturing this.’” He ended up covering the ensuing events for five days straight before he decided he could take a break.

His experiences covering Floyd clearly illustrate the strength and importance of diversity in the newsroom. His upbringing in South Minneapolis familiarized him with the community, the issues, and empathy needed to tell the story.

“I played high-school football blocks from Third Precinct,” he said. “Maybe I don’t know all the community members personally, but I understand their anger.” He’s not entirely sure what it is about him that allows him to float confidently through protest crowds “almost like a ghost” following a tinderbox story—his first was in the aftermath of the Jamar Clark case—whether it’s because he’s “Asian, short, not a threat?” But he says while adrenaline rushed, he was mostly unafraid. He was fine. He counts on those factors to peacefully and safely uncover a story and share it with an audience.

“When I’m out there, overall, I make sure I am not in harm’s way, and then do my job peacefully,” he said. But, a “white reporter would not have gotten that cell phone footage or those interviews. We need to have more minorities in the newsroom.” He continued, “This benefits a company for having people like myself who are not called John or Mike. When the name Dymanh Chhoun is under the photo, or under the video, people see that at home and feel like, ‘Yes, good job WCCO, I trust them.’”

Chhoun said he never had designs on being a photojournalist for a major broadcast outlet. His parents arrived here from Cambodia via a refugee camp in Thailand in 1993 when he and his siblings were small, and getting through school was a struggle. He didn’t know English. He was behind in reading and math. He was bullied with racist taunts, and he was expelled for fighting back.

But, he said, it was opportunities like ThreeSixty Journalism that helped boost him and show him he should dream bigger. The program, run by the University of St. Thomas, is an immersive journalism camp that aims to give a diverse set of high schoolers an inside look at the industry and provide needed mentorship. He says mentorship from journalists Dave Nimmer and Lynda McDonnell were key to his future success.

“I was not even the best in the program, but they saw something in me, you know? They said, ‘This kid could be somebody. This kid could do something.’”

Still, he wasn’t sure that big-name journalism would be his end goal. He tenaciously got his associate’s degree from Normandale, but still wondered what he should do upon graduation. He called his mentors from ThreeSixty, who informed him he’d need a bachelor’s degree to be a journalist, and encouraged him to go for it. Nimmer went with Chhoun to apply to the U of M. He was accepted.

“The U of M is a great school and I’m happy they got me to where I am,” he says. “It’s a very emotional thing for me. It still feels like a dream when I think about who I am and how hard it is to survive in this life as first-generation with parents with no education, no American relatives, and then how hard it is to stay in the industry.” He was the first college graduate in his family.

After graduating from the University of Minnesota with his journalism degree, he was hired as a photojournalist at KTTC-TV NewsCenter, the NBC affiliate station in Rochester, Minn. He earned a 2013 Minnesota AP Broadcast Award in the ‘Spot/Hard News’ category for his ‘Flash Flood Rescue’ report during his time there. And in 2016, he took first place in the Special Project/In-Depth Series category at the SPJ Page One Awards.

But this spring, he decided to leave his full-time post at WCCO to assume the role of program manager for the 20-year-old organization that recognized his early, raw talent: ThreeSixty Journalism.

One of the big reasons? His coverage of George Floyd. “We need people who have the look and understanding of people around you. If I stay in the WCCO newsroom being a photojournalist, can I help with that? Maybe.

But if I continue to use what I experienced during all the protests, and using that experience to help minority kids learn how important it is to have people in the newsroom like me? If I can tell them my story, I can motivate them to say, ‘If he can do it, I can do it.’ That’s what I care about.”

And that will all add up to a more diverse newsroom. “When I think about what I experienced from ThreeSixty, and now I can teach and help them the way I got taught? It’s unbelievable.” He said he’s already getting tapped to freelance for a variety of news organizations, so he won’t be leaving the field, either.

“I want respect under my name: Dymanh Chhoun.” He said he works hard every day to make sure he earns that respect. “I hope my story could change someone, show someone you can do this and get something out of your life. People should know: I turned my life around and I never looked back.” 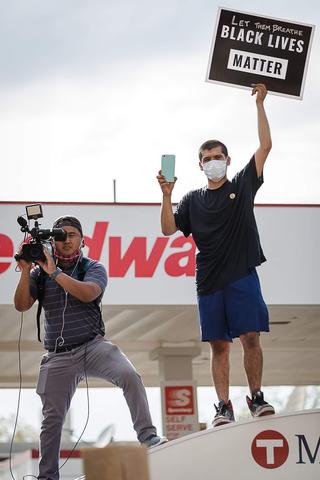