Scott Meyer Ends His Career Where it Started

The Hubbard School alum retired after a varied and illustrious career, which ended with him serving as the chief marketing officer for the College of Liberal Arts.

Life often has a funny way of coming full circle; sometimes you end up right where you started. For Scott Meyer, his journey began in 1967, as a journalism student at the University of Minnesota. Now, he’s ending his career in the same place. Meyer retired in June, wrapping up an impressive career in advertising that shaped the local industry.

For many years, he worked for several esteemed businesses both big and small, like Weber Shandwick, Liberty Diversified International, and Lawson Software. Eventually, Meyer returned to the University of Minnesota, working as the chief marketing officer for the College of Liberal Arts and creating the student-run communications agency, Backpack. He’s been a mentor to many Hubbard School students and has left a lasting impression on those he met along his remarkable career.

When Meyer started at the University of Minnesota, he aspired to be a high school journalism teacher and a basketball coach. He was working part-time in the mailroom at what is now Piper Jaffray, an investment bank, when an advertising executive told him to go into marketing, as it was a flourishing field. This one moment convinced him to change his career ambitions, altering the course of his life. “It was just that moment of serendipity. It happened for a reason. And I just decided, ‘OK, this sounds like it’s right for me,’” Meyer said.

He graduated with a degree in journalism with an emphasis in advertising and public relations, and spent the first 10 years of his career working in the corporate side of public relations at places like Piper Jaffray, First Bank Minneapolis, and Control Data Corporation. Meyer then shifted over to the agency side of advertising, going from working for a small agency of 19 people to becoming the chief executive officer of Shandwick International, which he eventually helped merge to become Weber Shandwick, one of the world’s leading public relations firms.

Next came a brief stint in international business acquisition, traveling the world and obtaining business services for Liberty Diversified International, bolstering his reputation as an advertising expert and gaining the attention of the University of Minnesota.

He started by working on strategic planning for the University of Minnesota, with organizations like the medical school, the alumni association, and the Carlson School of Management, among others. Then, the College of Liberal Arts offered him a job, allowing him to come full circle with his career. “The College of Liberal Arts was restructuring their communications and marketing and asked me if I wanted to join, so I ended at the University where I began,” he said.

Giving Back to the Community

While working as the chief marketing officer, Meyer wanted to give back to the community that fostered his career by helping students develop professional experience in advertising and public relations. To do this, he created Backpack (called CLAgency at the time) in 2014, a student-run communications agency. Though Meyer offered advice and guidance, he wanted the students to manage the agency, allowing them to gain skills in interviewing, editing, writing, and creating advertising campaigns. Working directly with students has always been important to him, so serving as a mentor to the students of Backpack has been extremely meaningful.

“The highlight of my career was forming Backpack,” Meyer said. “We did something so different with students; rather than a club, we formed an actual agency, where students were getting professional experience opportunities. Watching them just take it and grow it into a community that was doing amazing things has been the absolute most rewarding thing.”

Backpack started with nine students in the basement of Johnston Hall with the College of Liberal Arts as their only client. It has now grown to more than 40 employees and serves several external clients in addition to CLA. Although Meyer is retiring, there’s no doubt that Backpack will continue to thrive and expand.

Over the course of his career, Meyer established himself as an influential leader in the advertising industry while also being known for his positive demeanor and big heart. “Scott’s reputation was well known outside the halls of Johnston and beyond, in the marketing and communications of the state and the region,” said Susan Thurston-Hamerski, assistant director of alumni and donor communications in CLA. “When I met him during the interviews for my position, I was filled with fear and awe. Imagine my delight in finding him to be the kindest, sincerest of gentlemen. His GQ-worthy style was simply frosting on the ‘best-of-big-bosses’ cake. I will take from him many things, but, most of all, the importance of listening, openness, and starting from the position of ‘yes.’”

CLA Dean John Coleman speaks to Meyer’s work ethic and positivity. “He is one of the most creative, energetic, and optimistic people I have ever had the good fortune to call a colleague,” Coleman said. “He defines the term ‘can-do attitude.’ In fact, he was so can-do I sometimes had to pause and think...‘Wait, do I really want this wacky idea to happen? Because Scott will make it happen, so I’d better be sure.”

Many of the students Meyer mentored in Backpack have gone on to have exciting careers in advertising and communications, thanks in part to Meyer’s constant support and confidence in them. Former Backpack student Katelyn Faulks attests to this. “Scott showed me that what’s ‘possible’ isn’t limited by what has been done before, but by building the right team and asking the right questions to solve a problem,” she said. “He is a connector, a collaborator. With his calm demeanor, he truly makes up exactly what you want in a leader and, I would say, teacher, because he is wise and there when you need support, but gives you the reins—the opportunity to shoot your shot and prove yourself.”

Although his career is coming to an end, the impact he’s had on those he met lives on. He’s leaving a legacy, not just as a major advertising talent, but as a mentor, friend, and role model.

In retirement, Meyer plans to move to Medellin, Colombia, fulfilling his longtime wish to live abroad. “I really want to have that experience of pushing myself into something so different—the language, the culture, the food, everything,” he said.

Although he’s excited for the next chapter in his life, Meyer will undoubtedly miss his colleagues in the Minneapolis area and the College of Liberal Arts. Most of all, he’ll miss the students and the day-to-day interactions with them.

“If you’re not a faculty member, you rarely have that opportunity to have ongoing engagement with students, and that’s what university is all about. So, the fact that I was able to work at the University and be directly involved with students, I will definitely miss that,” he said.

His parting advice for students is to be willing to take risks and follow those small, life-altering moments of chance, like he did all those years ago. “Your life can be changed with those moments of serendipity.”

Lauren Borchart is a Hubbard School undergraduate and student employee in Backpack. 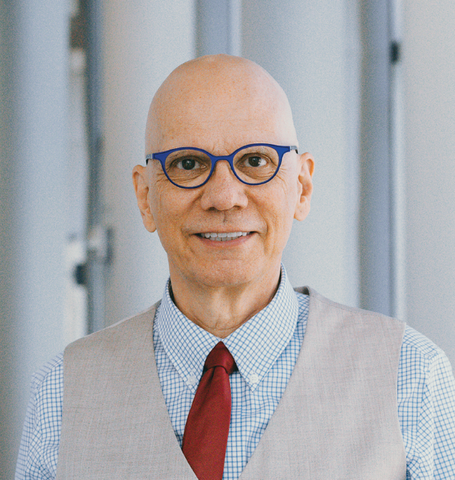