Meghan McInerny (B.A. ’00) is not afraid to take a leap. Now, she lands into her new role as director of strategic experience design at Best Buy.

Meghan McInerny has worn a lot of hats in the two decades since she graduated. Most recently, she was COO of Clockwork, a digital agency, where she was the company project manager alongside friend and CEO Nancy Lyons. The duo launched Geek Girls Guide, a podcast and blog which morphed into the book Interactive Project Management: Pixels, People, and Process. She regularly speaks on panels about interactive work—most likely wearing bold magenta or emerald, accessorized with leopard print. She’s a board member for Still Kickin, a nonprofit founded by her sister, author and podcaster Nora McInerny. She also nailed a spot on the (Real) Power 50, and Mpls.St.Paul’s Business Journal’s Woman to Watch list.

With McInerny, there’s been a lot to watch. Her education at the University of Minnesota actually began with a major in elementary education. Before graduating, she spent a year teaching in a Montessori school, only to realize she was better suited for the creative life.

After taking a couple of years off and getting hired at Gage Marketing in accounts, she decided to return to the U. “It was extra powerful because I was getting the classroom version and, at the exact same time, the real-world version which is always a lot messier and more complicated,” she said. That’s where she met Nancy Lyons, then the president of Bitstream, one of the first internet providers in Minneapolis.

“When I met Nancy, I had this really powerful feeling—I really need to go work for this person,” she said. So, even though she never considered herself a techie, she began to court Lyons to work at Bitstream.

Eventually an executive assistant position opened up, and McInerny jumped. “My parents were like, ‘What is wrong with you? Why would you go from an account executive to an administrative assistant?’ But I could feel this was the right thing. Years later, when I was reading ‘Lean In,’ Sheryl Sandburg wrote something like, ‘When you are offered a seat on a rocket ship, you don’t ask which seat, you just get on.’”

During her nearly 14 years at Clockwork she rose to COO—a role in which she even wrote a user manual about herself for her employees. “I needed to figure out all the different ways I could jumpstart relationships with the people I am managing where we have to try to build trust and understanding and relationships with each other really quickly,” she said. It was a tool that other employees started to borrow for themselves. They’re all considered works in progress.

Toward the end of her role at Clockwork, she took a quiet year-long sabbatical. “Similar to what happened to me at Gage, I started to have this gut feeling I needed to do something different and I didn’t know what it was. I tried to talk myself out of it. Why would I want to leave? I helped build this company, I love the leadership team and the vision and am good friends with CEO,” she said. “Acknowledging my privilege, at any other time in the past, listening to my gut has paid off. And when I haven’t, I’ve regretted it, even if my brain does not understand it.”

Her LinkedIn post about taking a sabbatical got a lot of attention, including from folks at Best Buy, who mentioned they had an open position: director of strategic experience design. Now, with a user manual about herself in hand, she is that director. She helps lead a team tasked with designing the experiences customers will want, need, and expect one to three years from now. She started just as COVID-19 hit, so she’s yet to really have a normal day at the office.

“I’m a person who is good at translating between two groups of people who don’t totally understand each other, and I just kind of fell into a type of job that is taking advantage of all these things I’m good at,” she said, of her ability to toggle between tech and creative. “I didn’t realize what I was doing involved a particular set of skills and talents. In my mind, all of this stuff came easily to me, and therefore I thought anyone could do it. It took me several years of professional experience to see other people struggled to do what I was doing that helped me realize it was valuable. I thought, ‘This is what I was going to do when I grow—oh, I am grown up.’” 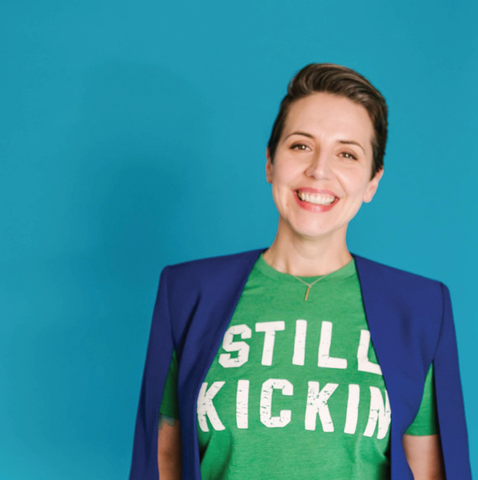