“This was the generation that was supposed to end nicotine addiction,” says Sherri Jean Katz, assistant professor in the Hubbard School of Journalism and Mass Communication. Katz researches youth and vaping from a health communication perspective. She focuses on how vaping messages and prevention messages influence how youth perceive vaping risks and how this influences their choices.

“There's been 70 years of data on the health risks associated with cigarettes and quite a bit of research on how people think about the risks associated with cigarettes. But we don't have that history of research on e-cigarettes,” says Katz. This lack of information can be challenging, as it is difficult to communicate health risks when they are not fully known at this point. Recognizing a need for more information on risk perceptions of vaping, Katz took on the challenge herself.

Katz first began researching tobacco regulatory science while pursuing her PhD and postdoctoral in communication at Cornell University. At the time, vape products were mostly marketed towards adults looking to quit cigarette smoking. Since then, she has witnessed the increase in the use of vaping devices among youth, especially with the rise in popularity of the brand JUUL. “We've seen a big change here on the University of Minnesota campus in the past few years. I conducted a series of focus groups in spring 2017, and then we did focus groups [in] spring 2019, and there is a huge change in usage patterns.”

Her research initially focused on use among college and high school students, but she has recently received a grant from the National Institutes of Health to collect data from middle school students on how they perceive messages about vaping. To do this, Katz shows middle school students photos of vaping products, like they might see in a store, with different packaging elements, such as modified risk statements and flavors (eg tobacco vs. candy). She then collects data on risk perceptions and connects that to which category of statement and flavors the students viewed.

Katz believes the most effective way to make youth consider the risks involved with vaping is by encouraging them to think twice about what the packaging is telling them. “Based on my research with high school students, when they think deeply and really think critically about the messages they were seeing, those high school students are able to have higher risk perceptions and then lower intentions to use e-cigarettes.”

“I definitely think that from a messaging perspective, what you show them versus how they perceive it becomes a very important story,” she says.

Before the introduction of vaping, Gen Z (people born between 1995–2015) was viewed as the generation that would end smoking. “There was a call that this generation was going to end nicotine addiction. This was no longer going to be a thing; cigarette smoking rates had gone down, remarkably, and that was where we were heading.”

Unfortunately, Katz sees a distinct relationship between people who currently vape and the likelihood that they will become addicted to nicotine and use cigarettes in the future. “We have a real increase in the potential for true nicotine addiction among youth and young adults.”

She sees the culture around vaping to be one of the reasons it is a growing issue. She explains that while everyday vaping is sometimes stigmatized, social vaping is not, and social vaping leads to everyday vaping for many. “There's this culture where it's okay to do it socially, but you wouldn't want to be seen doing it alone or on your own time.” To combat the normalization of social use, Katz believes, “it could be helpful to make that connection, so that people connect that social use to everyday use.”

To Katz, one way to tackle this issue is to research the perceptions that people have about vaping. “Recognize that this problem (nicotine addiction) that we thought was going to be solved is actually now a huge challenge in our modern society. It's important not to dismiss it.”

Katz is taking her research to policymakers who can use her studies to make a difference as they develop vaping policy. “I've had the chance to speak directly with legislators and some policy folks. I think that this is an amazing opportunity to have an impact and allow my work to not just live in scholarly journals.“

She hopes that her research can mitigate the youth vaping problem. “I'd like to see a change in the statistics regarding teen and young adult use.”

By Lauren Borchart and photo by Samiraa Amin 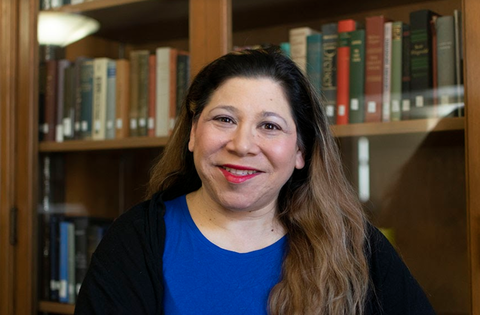