When Kathy Hansen was a girl, she wanted to be an astronaut. It was the height of the space program, and astronauts were exploring from the Earth to the moon on a regular basis. But as Sally Ride would go on to say, you can’t be what you can’t see; there were no female astronauts making those trips.

Even with her NASA dreams in the rearview mirror, Hansen’s desire to explore and innovate never wavered. For 40 years she pushed educational and technological boundaries to the great benefit of the Hubbard School of Journalism and Mass Communication, as well as journalism and communications students and professionals across the country. Over the years, Hansen was recognized by her peers, her superiors and the industry again and again. She earned the John Tate Advising Award for Excellence in Undergraduate Advising, the Pioneer Award for Outstanding Contributions to High School Journalism Programs and Publications, the Special Libraries Association David Rhydwen Award for Outstanding Contributions to News Librarianship, and the Society of Professional Journalists President’s Award.

People don’t use the word ‘legacy’ lightly, but after Hansen announced her retirement as of December 2019, her students and colleagues used ‘legacy’ without hesitation to describe her contributions to the School.

While completing her master’s degrees, Hansen took a job as a librarian in the medical library at Madison, working the undesirable 2 p.m. to midnight shift. Not only did she dislike walking home in the middle of the night, but “it was terrifying that the information the med students were asking me to find were matters of life or death,” she said. She found a less-intense position running the journalism library instead, where she did all the ordering and cataloging and became the head librarian in a short time.

Across the border at the University of Minnesota’s journalism school, Professor Jean Ward recognized that future journalists and communications professionals would need to learn how to gather information in sophisticated ways. In 1980, Ward encouraged the School to hire an expert in library and information science who could help develop a new course that focused on information gathering and journalism. Hansen got the job.

Ward and Hansen worked together creating a course, Jour 3004: Information for Mass Communication. What they soon discovered was there was nothing like it in the country. “We needed a book, so we wrote a book,” said Hansen, about Search Strategies in Mass Communication. “I did not foresee that [the course and the book] would serve as a model for a new curricular area in journalism schools around the United States.”

Together the two broke ground experimenting with and creating computer-assisted exercises on search strategy for the students in the class. Over the years the exercises evolved for every type of computer—mainframes, floppy disk, the beginning of the web, then the web. “It all started because we couldn’t send 150 students to the library at one time,” Hansen said. “We created the simulations out of necessity. But the students loved it.”

For the next four decades, and for thousands of students, Hansen updated the course to stay ahead of the times. In the era of Google, she had to challenge her students to gather and verify information in many different ways. Information for Mass Communication is notorious for being tough, but students come out the other side with a deeper appreciation for the craft.

“One of the things that’s really struck me over the years, no matter what generation we’re talking about, is if you treat students with respect and assume they want to learn, most of them do. I’m up there doing my best, and I’m going to assume you are too,” Hansen said.

Hansen firmly believed that every action she took, and every decision the School made, should be with the students’ best interest in mind. And that starts at day one. A student can’t become a Hubbard School major without taking Jour 1001: Media in a Changing World, a course that has her fingerprints all over it. It was Hansen who insisted that because the course was a recruitment tool for the School, it should be taught by full-time faculty. The course is also students’ first peek at the career possibilities for majors, a video project spearheaded by Hansen as well.

Hansen also reconfigured how honors students were serviced by the School, offering them a direct pipeline into the program during their freshman year, and more than doubling the students in the honors program. During stints as both the director of the Minnesota Journalism Center and Director of Undergraduate Studies, she increased the opportunities for students to connect with industry professionals.

“It’s really the work she does with and for students that will be her lasting legacy,” said Nora Paul, retired Hubbard School assistant professor and Hansen’s co-author on several publications, including the updated digital text for Jour 3004. “For all her excellence as a researcher and the influence she had in the industry regarding information quality and access in the production of news, she is a teacher. The programs and curriculum at the Hubbard School reflect her care and attention to the needs of students interested in preparing for a career in journalism or mass communication.”

While Hansen’s work has primarily been with undergraduates, many graduate students credit her for their success as well. Several current faculty members, like Regina McCombs, Ruth DeFoster, and Betsy Anderson, had Hansen as a mentor and an advisor when they tackled advanced degrees while working professionally or raising families at the same time.

Debra Kelley, a former adjunct instructor and Ph.D. graduate, had Hansen as her dissertation advisor. Kelley said she owes Hansen for her successful completion of her doctorate. “She shepherded me through the proposal phase to completion of my dissertation and oral defense. She helped me pick up the pieces and re-shape the direction of my doctorate research and she kept me on track and always gave me the feedback I needed to keep moving forward,” Kelley said.

“The legacy Professor Hansen will leave on our department when she retires is immense,” Kelley continued. “The thousands of students who have been touched by her hard work in the department and those who were lucky to have her as their teacher are better practitioners and more confident people because of her.”

In 1997, Hansen became the director of the Minnesota Journalism Center (MJC). Her goal was to reintroduce the School to the professional community. She worked to partner with journalism training organizations such as Poynter, the Associated Press, the National Television Academy and more, to offer training opportunities to professionals, both locally and nationally. “There was a desperate need for training in the professional community,” Hansen said. “I always thought of that as my duty as a teacher, and I saw them as another group of students.”

Hansen was instrumental in creating a one-of-a-kind partnership with the Federal Reserve Bank of Minneapolis to offer the Supply, Demand and Deadlines workshop on economic literacy that brought in participants from media organizations from around the country. It was during her time as director that the U.S. State Department asked the MJC to host the inaugural class of Edward R. Murrow Journalism Fellows from around the world. The MJC’s model was then used by other schools around the country. The Murrow program continued to partner with the MJC for many years.

Hansen also led the MJC to connect with and support high school and college students and advisors by partnering with the Associated Collegiate Press Association and the National Scholastic Press Association. “My 14-year stint directing the Minnesota Journalism Center was one of the highlights of my career at the Hubbard School,” Hansen said. “I deeply value the connections I made with members of the professional journalism communities nationally and locally.”

In 2010, Hansen agreed to become Director of Undergraduate Studies, a position she held through the 2015 academic year. This role gave Hansen the chance to bring her knack for reinvention to the undergraduate curriculum as a whole. “I said I would only take on the position if they let me blow things up,” she said. “We brought in everyone —professionals, adjuncts and faculty—and after months of work, we came up with a different curriculum.”

Hansen’s institutional knowledge and community connections are irreplaceable. And her dedication to student success will remain aspirational to faculty members for years to come.

“I don’t think there is anyone in my time here that has given more to this school than Kathy. I can say that as her former student, current colleague and her mentee,” said Chris Ison, who has known Hansen for 40 years. “Her fingerprints are on so much of how Murphy Hall was built over the last 40 years. The curriculum we have now have evolved from decades of her work. She has been my go-to person when I’ve had questions as the Director of Undergraduate Studies, and she always had an answer that was much easier than I could imagine. It would be hard to find someone who cares about this place as much as she does.” 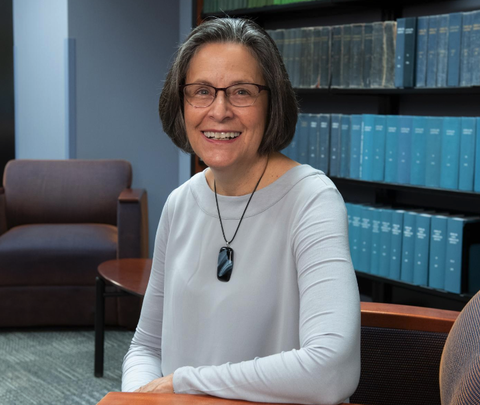