Chris Ison Steps Back, But His Lessons Live On.

At the beginning of each semester, the students in Chris Ison’s news reporting class take out a piece of paper and start a list of “Rules for Good Reporting.” Rule No. 1: In journalism there’s no such thing as writer’s block because, Rule No. 2: Good writing comes from good reporting. The class adds to this list over the course of the semester and it usually ends up being 20 items long. Many students claim to hold on to these rules as they venture out in the world after graduation.

Jenna Ross (B.A. ’14) is currently the arts and culture reporter at the Star Tribune, and Ison was her instructor for two classes during her time at the Hubbard School. “He taught us how to ask tough questions, how to write a tight lede, how to source a tricky story,” she said, referencing the “Rules.” “‘One-source stories suck,’ he’d tell us. ‘Two-source stories do, too.’ When I’m writing, I hear his voice in my head. Then I pick up the phone to make another call.” To this day, that particular “rule” is memorialized on the bulletin board at the Minnesota Daily office.

Ison has been teaching in the Hubbard School since the early 1990s. He taught Public Affairs Reporting as an adjunct instructor until 2004, when he took a leave of absence from the Star Tribune to work in Murphy Hall full time. “I assumed I’d do it for a year and go back,” he said. Instead, Ison stayed for 16 years, taking on roles like speaker and trainer on journalism ethics, the Director of Undergraduate Studies, advisor to the Society of Professional Journalists student group, and the driving force behind the Star Tribune practicum course.

Last fall he decided to retire from full-time teaching as of May 2020.

Ison grew up in Crandon, Wis., and started his college career at the University of Minnesota-Duluth. He transferred to the Twin Cities campus because he knew it was one of the best journalism schools in the country. He took his time finishing—“I got my four-year degree and it was the best eight years of my life.”—because it was cheaper to take fewer classes while he worked different jobs to help pay the bills.

He spent most of his time in the basement of Murphy Hall working at the Minnesota Daily, putting out a paper five days a week. “We always say the Daily was the best job we ever had. The Daily is where we learned to be journalists. We learned together and made mistakes together,” he said. “It was a messy, loud, intense, fun place where we made lifelong friendships.”

Ison credits the Daily’s location in Murphy Hall as an added benefit. He and his fellow student journalists could bounce ideas off the faculty at any time. For example, Jean Ward was on the board of publications that oversaw the Daily; Ison credits her fierce support of the news staff and her wise counsel during difficult times when he was editor.

“I could also walk across the hall and ask Don Gillmor whether we were about to libel someone with our story,” he said. “Arnold Ismach would walk into the newsroom and say, “Ison, I just read your story. What’s the difference between the car being destroyed and totally destroyed?”

How many of these nuggets of wisdom ended up on today’s “Rules for Good Reporting?” Probably a lot.

After graduating in 1983, Ison headed back to Duluth to cover law enforcement, the courts and City Hall in Superior, Wis., for the Duluth News Tribune. A year later he got the gig covering Duluth City Hall and state politics, driving to St. Paul to cover the Legislature.

After three years, it was time to move to a bigger paper. He thought he would end up in Milwaukee, but then the Star Tribune made a competitive move and opened up a new St. Paul bureau, hiring seven new reporters. The paper hired Ison to cover St. Paul City Hall. It was here where Ison reported on the biggest story of his career.

Ison and his colleague Lou Kilzer spent a year reporting on and then, in October 1989, publishing a series of stories on arson and links between the St. Paul Fire Department and profits from arsons and suspicious fires. This series won the two reporters the 1990 Pulitzer Prize for Investigative Reporting. Much of his reporting over the years has taken home various national and state awards, including awards from Investigative Reporters and Editors, the National Press Club and the Associated Press.

If you walk by one of Ison’s classrooms on any given day, you’ll hear laughter. His dry wit, sarcasm and self-deprecating humor hit all the right notes with the budding journalists he teaches. It’s his enjoyment and respect for the students that made him start teaching in the first place, and it’s what’s kept him in Murphy Hall for so long.

“I learn a lot from the students,” he said. “It seems most of the students I teach are smarter than I ever was. I try to treat them like colleagues. I want them to treat me like they would treat me in the newsroom where people get respect based on their work, not by their title.”

His success with the students, his exceptional credentials and his character are what made hiring him full-time back in 2004 such an easy faculty decision, said former director Al Tims. Ison played a central role in the redesign of the undergraduate curriculum and strengthening the program’s relationship to the professional journalism community. “Beyond that, he served as an indispensable bridge between the school and the Minnesota Daily, served on the board of directors for the National Scholastic Press Association, and excelled as an adviser and mentor to aspiring journalists,” said Tims. “The bottom line is that Chris authentically cared about students and they knew it. He is among the finest educators and faculty colleagues I’ve ever known.”

The 2000s has been an interesting and challenging time to teach journalism—from the birth of social media and the growth of online publishing and a 24-hour news cycle to the closure of newsrooms across the country that brought on displacements and layoffs, and the fight for the Fourth Estate against an antagonizing administration. The industry is completely different than when Ison worked in Duluth in the early ’80s. He recognizes that he might’ve had it a little easier than students and new journalists do today.

“You have to be well-rounded—take photos, shoot video, understand SEO, be a savvy social media user,” he said. “But, ethics and accuracy and fairness are still important, even if you’re tweeting. We can be too quick to lose track of that. Walk into any newsroom, and most of the stuff that we care about is based on good reporters getting people to talk to them, digging up records, unearthing difficult truths, and writing it in a way that people pay attention. The platform doesn’t matter if you don’t have anything to say.”

Staying current, while also staying positive about the industry, is something all journalism instructors have to embrace. Ison manages to drive home the fundamentals, while keeping things fun for his students. “I learned in the newsroom that reporting is really hard work and it’s important work. So, you better have some fun while you’re doing it,” he said. “Our students here are working their tails off and if they can’t have fun, they’re not going to keep doing it. And we need them. Journalists are really important to democracy. I think my students know I really believe that.”

Andy Donohue (B.A. ’00), who works as managing editor at Reveal from the Center for Investigative Reporting, was a student in Ison’s public affairs reporting class in the late 1990s, as well as on staff at the Daily. “Chris Ison was always brutally honest about the ups and downs of being an investigative reporter. One day you’re on the top of the world. The next in the depths of despair,” said Donohue. “Even with that sometimes frightening transparency, he somehow made the job sound like the greatest thing you could ever make your life’s work. He’s inspired a whole generation to go out and ride those highs and lows, all with one goal in mind: trying to uncover the secrets that powerful people want hidden.”

Of course, teaching at a university is a multifaceted, busy position. You not only have to support the students, you have to support the curriculum and the faculty as a whole. Ison credits the Hubbard School and its faculty for understanding that the diversity of experiences each member brings is crucial for student success. “I’ve felt really lucky,” he said. “I’ve always been treated as an equal amongst all my colleagues.”

Jane Kirtley, professor and director of the Silha Center for the Study of Media Ethics and Law, has worked with Ison for two decades. Together they wrote the book, Media Ethics Today: Issues, Analysis, Solutions. Kirtley likens Ison to Lou Grant, the fictitious news director played by Ed Asner in the Mary Tyler Moore Show. “He’s hard-working, meticulous, absolutely committed to preserving a free press, devoted to training our students to uphold the highest journalistic and ethical standards, doesn’t suffer fools gladly but has a heart of gold,” Kirtley said. “No one can or will replace Chris.”

You’ll still find Ison’s heart of gold in the halls of Murphy next year (he’ll be an adjunct), just not sitting in the second-floor office he’s occupied for so long. You might also find him fly fishing in a Wisconsin stream, at the golf course, or slalom waterskiing at the lake. After four decades in journalism, he deserves to kick back a little and, perhaps, develop a new set of rules—those for a good retirement. 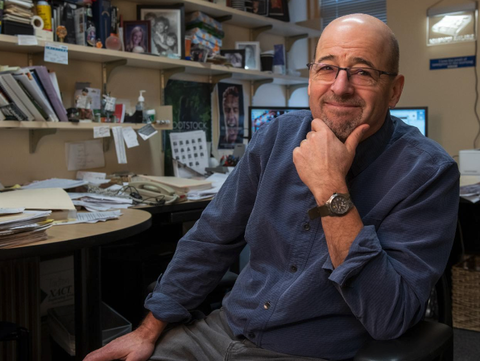