Alex Robinson (B.A. ’10) grew up in Wisconsin to a hunting and fishing family. As a child, Robinson would spend much of his time outside with his father, Mike Robinson. This is where his interest in the great outdoors began.

Alex’s father was a subscriber to a magazine called Outdoor Life, which Robinson would spend his free time reading, absorbing all the information he could about hunting and fishing. Growing up, Robinson was shy, but discovered that through his writing he was able to communicate thoughtfully and effectively to the world. He worked for his high school newspaper, which stoked his desire to write.

“Being able to write something well and get positive attention for it, that kind of clicked and I was like, oh, there’s more to this than just school and classes. There’s a level of communication going on here that I really like,” he said.

He decided to pursue journalism at the University of Minnesota, with a minor in fisheries and wildlife. He even nabbed a job at The Minnesota Daily his freshman year, and was thrown right into the fray on his first day.

“I was an intern on the projects desk,” Robinson said. “And one of the more senior reporters was working on an obituary, but he had to leave to go to class. He gave me all of his notes and he told me to sit at his phone in case any of the contacts called back and to interview them. I just sat there terrified for the hour that he was gone.”

While at the Daily, he covered the St. Paul and environment beat, and in 2009, Robinson’s senior year of college, he was promoted to Managing Editor. Along with his position at the Daily, Robinson also interned for the Star Tribune.

After graduation, Robinson was hired as an online editor for Outdoor Life, the very publication he read as a kid. While an exciting opportunity, it also meant he had to pack his things and move to New York City. “I had grown up in the suburbs of Wisconsin and was going to college in the Twin Cities, so New York seemed like a giant, intimidating place to me. Living there and working there, and surviving day to day was a challenge.”

Outdoor Life was founded in 1898 in Denver, Colorado. During its more than 120 years, the magazine has reported on the lifestyles of America’s hunters and fishers, offered tips and tools for conquering wildlife, and provided information on conservation and habitat. Iconic figures have contributed to the magazine over the years, such as Ernest Hemingway in 1935, Theodore Roosevelt from 1901-1904, as well as Clark Gable, Babe Ruth, and Amelia Earhart.

For more than a century, the magazine has remained consistent in its offerings to its audience.  Outdoor Life has, however, seen a shift in its publication schedule. What used to come out every month now finds its way to the doorsteps of outdoor enthusiasts just four times a year, with online content filling in between issues.

Robinson continued to move up the ranks at the magazine. He also moved back to Minnesota. After five years of living and working in New York, he relocated to Mahtomedi where he works remotely. The distance from the main office hasn’t affected his ability to produce the content his readers desire and impress his colleagues at the magazine. In fact, in July 2019, at just 31 years old, Robinson was promoted to editor-in-chief.

“I’m way closer to a lot of the hunting and fishing opportunities that I really enjoy, so in some ways I think living in Minnesota makes me a more effective editor,” he said. And Robinson visits the New York office five times a year to catch up with co-workers.

The Minnesota Daily, Star Tribune, and the Hubbard School all made Robinson into the writer and editor that he is today. He advises students to get out and network with the professionals in these organizations and elsewhere, and put themselves in situations that will hone their skills.

“The person who you turn copy into who you’re nervous about, that’s the person you should be writing stories for because they are going to force you to get better,” he said. 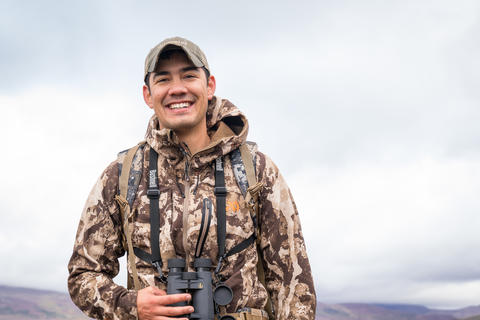