“The media shapes our perceptions of the world, our behavior, our understanding, our knowledge.”

Emily Vraga, new associate professor in the Hubbard School of Journalism and Mass Communication, received her PhD from the School of Journalism and Mass Communication at the University of Wisconsin-Madison, and taught at George Washington University and George Mason University before coming to the University of Minnesota. Her recent research examines the impact that misinformation on social media has on interactions online and the best ways to navigate situations in which misinformation causes conflict or misperception.

“What I really got passionate about quite quickly was social media and how it was changing the way we had conversations about the world, especially in politics.” She was inspired to dive deeper into the effects of misinformation. "My question started becoming not just about disagreements, but about what happens when there's misinformation on social media. How is that affecting society?”

Vraga showed participants a fabricated post that contained misinformation, followed by a second post that either confirmed or corrected the misinformation; she then analyzed the effect of the second post on how the reader understood the content of the first fabricated post. She tested different correction techniques, which included using expert organizations on Twitter and the “related stories” function on Facebook to deliver corrective information. The results showed that when users saw corrective information at the same time as the misinformation, misperceptions were reduced.

The Value of Media Literacy

Since her research focuses so heavily on the spread of false information, Vraga is a fervent advocate for media literacy, which she carries into the classroom. Vraga teaches Jour 1001: Media in a Changing World, as well as a graduate class in content analysis. In her classes, she emphasizes the value of being a thoughtful consumer of media. “I give [students] the space to think more deeply and critically about the media and the way it influences society.”

“It's very hard to be a person in this world and not be impacted by media. It surrounds us; it is an integral part of our daily life. So shouldn't we spend a little bit of time thinking critically about how media is created?” Vraga’s response to the challenge she poses is more hands-on media literacy lessons that have real-life examples. “We need more targeted news literacy campaigns that put those messages in front of people at the time they're consuming this information.”

Although Vraga is critical of social media, especially when it comes to the dissemination of false facts, she still believes that it can be a positive force in society when used correctly. “I tend to be an optimist. I tend to think it has more good than bad, especially if all of us work to ensure that that's the case.”

She hopes that her research will encourage society to become more conscious consumers of social media and to be responsible when coming across falsities. “You can do it, I can do it. We can all work together to correct misinformation.”

This story was written by Lauren Borchart, an undergraduate student in CLAgency. Meet the team. 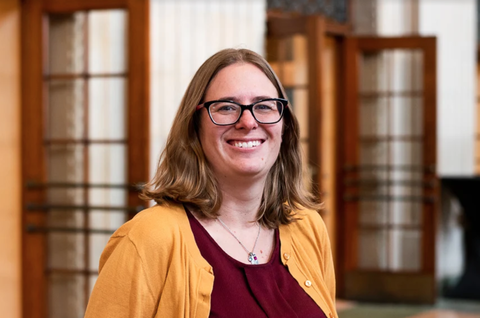