In response to attacks on the free press, this alum decided to do something about it.

Wenker earned her Masters in Business Administration from the University of Minnesota in 1985. But she credits the skills she learned at the Hubbard School for her job. Wenker retired in 2015 as a senior vice president of General Mills and head of its Investor Relations Department for 15 years.

In 2018, Wenker reached out to the Department of Institutional Advancement, wanting to start a scholarship for students in the Hubbard School. She created the Kristen Smith Wenker Journalism Scholarship for undergraduate students who demonstrate an interest in pursuing print or broadcast careers after graduation. We talked to Wenker about her career and her motivation for giving back.

On her educational journey
“The University of Minnesota was the only college I applied to in 1976. My idea going into college was that I was interested in business and working with language. I thought I’d major in German, minor in business, and go to work with a multinational company in Germany. After freshman year, it was really clear the German department was prepared to make me a Ph.D. in German literature, but not fluent in colloquial German and a successful employee in Germany. I love liberal arts and didn’t want to leave CLA. I thought, ‘What else can I get a degree in that will lead to a job?’ And so, the journalism school.”

The importance of mentors
“One of the first things I did as a journalism student was attend a PRSSA student group presentation. There was a fabulous graduate student who was looking for people to help her on a pro bono basis at Ramsey County Foster Care to attract more host families into the foster care program. That was Lynn Casey, who is now the head of Padilla. She’s turned into a juggernaut, and the rest is history.”

Working woman
“Those of us who graduated in June of 1980 came into a tough job environment. Many of us in the journalism program were looking for any toehold we could get, including post-degree internships. Anything to get in front of someone and a chance to prove yourself.

“Back then it was still Virginia Slims, bring home the bacon and fry it up in the pan and make it all work—and that was a new thought. Title IX passed when I was in eighth grade, so I was among the first women showing up in college thinking I could be a CEO or come close. But you had to see other women with the same ambition. And you needed people who looked at you and said, “You can do this!”

“That’s how I got in at General Mills. I thought I was only there for 12 weeks but I hoped they’d think I was worth keeping. Halfway through the summer the boss running the corporate communications department asked if I wanted to stay. I worked for him for 17 years.”

Why this scholarship
“I’m thinking about supporting people headed toward print or broadcast journalism. I think right now with the profession under attack, we must have the best and brightest deciding they’re going to be the kind of reporter we were being raised to be. I was not in the print journalism sequence, but I still had to take the class. You needed to substantiate facts with more than one source, get people on the record, and you didn’t insert your opinion. If you were telling news, you reported the facts. We’re losing track of that in both print and broadcast media.

“The press is far from being the ‘enemy of people.’ There is no more protective organization in a democracy than a free and uncensored press. I want more super-bright liberal arts people to decide journalism is where they need to end up.

“If we have more fabulous people coming up through strong, well-resourced, well-funded J-schools that know the difference between entertainment and news reporting, that would be a help to our democracy.”

On giving back
“I have a beautiful life. So much of that traces back to the fact that I have a college degree. I had an ability to get a really good job, have a fun career, and meet incredible people. I learned about things I wouldn’t even have thought to be curious about. I’ve been giving to the CLA General Fund for a number of years. When I sent in my contribution for 2018, I said, ‘I want to send this as an endowed scholarship and here’s what I want to call it and how I want it to work, and I assume someone will contact me.’ They did!” 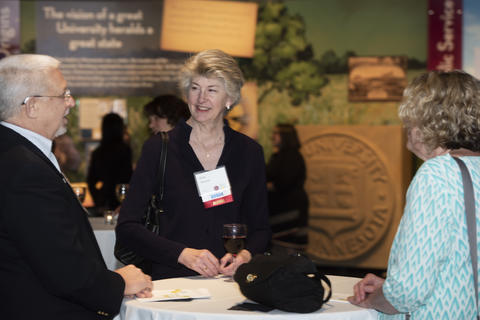