When Maggie Habashy graduated from the Hubbard School in 2007 at the ripe old age of 19—yes, you read that right—she was ready to travel, eat, and live her best life like Samantha Brown on Passport to Wherever.

She tried her hand at the local Fox affiliate producing weekend shows.

“I got to know a lot of PR folks and how they tell their stories, so I shifted from telling the news to making the news,” she said. She moved to the PR team at Best Buy.

Then she got married to a military man, moved to Korea, and had a baby. She moved to Seattle. She went back to Best Buy, then moved on to Sleep Number, where she led the corporate responsibility program from the ground up, among other corporate communications.

Despite all the success she was experiencing, her heart just wasn’t in it anymore. “I believe it’s important to be authentic to who you are,” she said.

Which is why when the Final Four came calling, she was all ears. The diversity in thought, experience, and ethnicity involved with the project grabbed her immediately.

“My boss – CEO and president Kate Mortenson—is female. The second in command is a black woman. Our team was 60 to70 percent female, 70 percent minority. Kate really focused on ‘OK, we need to have a diverse and inclusive group and not just in the team we have here, but also in vendors we’re using.’” Habashy saw the signal: The culture and the desire to be truly inclusive were priorities, not talking points.

But she knew that her work/life balance was about to get thrown out of whack. She talked to her husband to make sure they had clear expectations to execute both personal and professional lives successfully, and he was on board. Habashy left a full-time job for this intense six-month adventure.

“It is that much harder for working moms,” she said. “We are constantly feeling guilty and we can’t do everything 100 percent and we want to give 100 percent. That pressure is so hard. It can be suffocating. But I have to remember in the big picture. I’m going to remember the really great work and impact we’re making.” For example, she said, as a Muslim Arab woman hired to lead external operations for the Final Four, “I hope another little Muslim girl, or Arab girl thinks, ‘I can do that too.’”

A big part of her job with the Final Four was to make sure there was something for everyone. First, they had to determine who exactly was “everyone.” Habashy did the research and promotion to make sure they were reaching them all, first meeting with the Impact Advisory Group through the city of Minneapolis and then later, doing radio spots on Hmong and Somali stations.

She might have gotten her wish. More than 72,000 fans went to the games on Saturday night, setting an all-time attendance record for U.S. Bank Stadium. And nearly 100,000 people descended on downtown during the three-day weekend and its festivities.

“I am so proud of coming in here with six months—which, in the event world is nothing—and executing with excellence,” she said. “I’m sad it’s over. I want to ride this high forever. It’s a career highlight.” 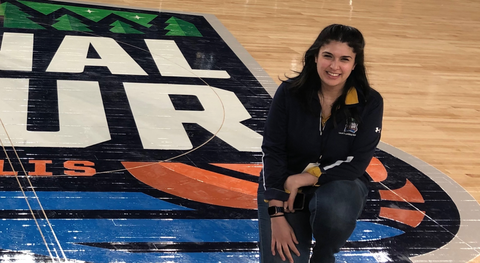