What to teach journalism students when their field is under attack?

The same things you always do, of course — how to interview, how to understand, how to get stuff right. But they're going to need something more, too.

Early August is when I usually begin planning for the basic news reporting course I’ve taught for more than 20 years to University of Minnesota journalism students.

What was different last summer was the backdrop: harsh, attacking noise from our U.S. president’s resurgent campaign branding journalists the “enemy of the people.” The vitriol has gotten particularly sharp recently, with angry crowds at Trump rallies shouting obscenities at reporters for merely showing up to do their jobs.

The spectacle bothers one former student, who recently posted a photo of a CNN reporter’s ambushed stand-up at a rally showing a man wearing a “F*** the Media” T-shirt, his face twisted in hate. My student posted: “What if your profession were being targeted in this way by scary/angry/violent people?”

As I prepared for the fall semester, I wondered about my incoming students. How will this bedlam shape their views when they show up for my “boot-camp” news writing course, which gives them their first real experience with the hard work of journalism? Will it frighten them? Embolden them? Confuse them?

For me, it raises the question of what I should be teaching them. Covering a speech is difficult enough, requiring students to not just listen to the speaker but also to understand the context of the event, figure out what’s important, seek balanced views, verify assertions, accurately report quotes.

Do I need to add “steel yourself to nasty crowd insults” to the list of skills? Maybe.

The truth is that none of last summer’s unpleasant sideshow is changed the fundamentals of my syllabus. I still put these newbies through the paces of what they need to know to be reporters: how to write ledes, how to attribute, how to get to the point in a story, how to interview, how to write news clearly on deadline.

I still demand they get stuff right, that they care about every inaccuracy and that they understand the critical importance of verifying when a claim is a fact — or not.

Most of them have the usual anxieties about newsroom jobs, which have declined 23 percent in this country within the past decade. I assure them, as I have for years, that the critical thinking, writing, data analysis and communication skills they gain in the major will apply across a range of careers. Besides, if they love journalism, they’ll find a way to work in it.

But I admit, these new aggressions against journalists don’t lend themselves to glib or rosy lesson plans. These are troubling times for U.S. journalists. To not respond is not an option. It’s my responsibility to help students see what’s happening today and to prepare them. So this semester, I advised students to cultivate resilience and courage beyond their expectation. Reporters have always needed thick skin to endure criticisms from people who fear scrutiny or who claim they’ve been treated unfairly. Abuse now extends to trolling, from which they can find no refuge. Their digital management skills of that must be savvy, and their skin simply needs to be thicker.

I prepared them for risk, too. Danger has always come with reporting. Students shouldn’t think they’re immune. Within the past decade, 621 journalists have been killed around the world, according to the Committee to Protect Journalists, including the four shot at the Capital Gazette in Annapolis, Md., this June. While that gunman’s attack appeared to come from a personal grudge, and while American reporters have not typically faced the life-threatening conditions of reporting in other countries, the propensity for violence is elevated by the fact that our commander-in-chief openly denigrates the press with vile name-calling that could easily tip an imbalanced mind.

Finally, I told them that waffling about their purpose won’t serve them. They have to believe wholeheartedly in the tenets of journalism — that facts don’t have alternative facts, that truth is verifiable, that the powerful must be held accountable and that journalists, if they are doing their job, are champions of the people.

These students have a lot to learn. Some come into class not knowing a lede from a logo. But my hope is that they will quickly understand that the louder the abusive clamor against their journalism, the more important their journalism will become for our democracy.

A version of this op-ed was published in the Star Tribune in August 2018. Gayle Golden is a Morse-Alumni Distinguished University Teacher and a senior lecturer at the Hubbard School of Journalism and Mass Communication at the University of Minnesota.

My prediction about this fall’s news reporting and writing class was right: I didn’t do a lot differently with the course content. I still took students through the basic lessons of story structure, attribution, fairness and fact-gathering. Yet the curriculum was shaped by polarizing news events: a contentious Supreme Court nomination, midterm victories marked by disputes about voter exclusion, troops sent to the U.S.-Mexico border to stop asylum seekers, a continuing special counsel investigation. Throughout, the media was still in the crosshairs – at rallies, in tweets and, in one instance, via a reporter’s temporary expulsion from the White House press corps. I asked my students to notice. I asked them to think about what it means to them. (In 12-minute snippets, we watched All the President’s Men so I could show them what has changed about reporting and, most critically, what has not.) And then I asked them to write a reflection. Here are a few of their thoughts. – G.G.

“It is easy to know that journalists must have thick skin, but it takes today’s rhetoric to understand just how thick. It is one thing to have to mentally prepare yourself for criticism and scrutiny, but it is another to have to conjure up the mental armor to protect yourself from a culture that denigrates you.” – Farrah Mina, professional journalism, global studies, Asian languages and literatures

“Trump may be our greatest teacher as prospective journalists…Work being done by journalists right now isn’t fighting [his] power with any other tools than those of the journalists who wrote decades ago. They’re reporting fact.” – Cleo Krejci, English, professional journalism, Spanish studies

“We can be scared, we can be shaken, we can be bothered, but we cannot be ignorant. Ignorance goes against one of the fundamental principles of journalism: being informed and reporting the truth.” – Jonas Dominguez, professional journalism

“Am I afraid of the chants of ‘fake news’, the signs with targets on journalists faces, the angry mob hurling death threats, and the suspicious packages? I’m not. I’m ready….I want to make my country better than it is today and I believe this can be done through journalism. By telling people the truth, even if it isn’t what they want to hear. By asking the tough questions, even if I’m attacked for it.” – Dylan Anderson, professional journalism

“All I can do, all any journalism student right now can do is be brave, learn to do the work of journalism accurately and to the best of our abilities and remember the essential purpose it is meant to serve as the Fourth Estate.”– Erin Wilson, professional journalism

“I may not dream of being a reporter, but I now have an incredible amount of empathy and admiration for that profession. We are living in dangerous times, and I will never stop fighting for a free press, even if that means putting myself in danger because these days, that’s what journalists are doing every single day.” – Jennifer Shaw, bachelor of individualized study

“I attended a conference at the Newseum several years ago. There, the names of more than 2,300 journalists are etched into glass in a memorial honoring journalists who have died reporting the news. Then, I looked up in reverence and melancholy, thinking primarily of those across oceans who tried to dismantle dictatorships through their truth telling and lost their lives because of it. Now, I look up understanding how costly the truth may be, and I wonder whether my name may someday join the list.” – Dylan Miettinen, English and professional journalism

“I know pursuing a career in journalism during an age where the media is called ‘the enemy of the people,’ is challenging. I don’t really know what to expect moving forward. But I do know that I’m not going to let fear prevent me from trying.” – Becca Most, professional journalism, anthropology, art history 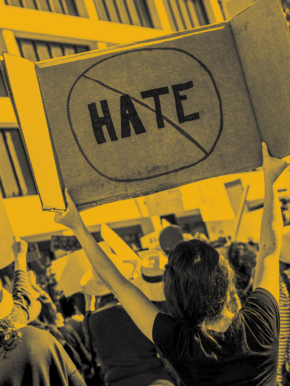