This alum is using journalism skills to study and tell the stories of Latino/Latina migrants.

Yuridia Ramírez’s email signature is nine lines long. That only includes what she’s currently doing, which is titled as follows: Chancellor’s Postdoctoral Fellow for 2018-19 in the Department of Latina/Latino Studies at the University of Illinois at Urbana-Champaign and Assistant Professor, Latina/o Studies & Global and Intercultural Studies, Department of Global and Intercultural Studies at Miami University.

A 2011 graduate of the professional journalism track, she was a first-generation college student, born of Mexican immigrant parents. She credits the advisor Ellen Sunshine for tagging her as a multicultural student, thus opening up educational opportunities, and mentors like former HSJMC associate professor Brian Southwell, associate professor Giovanna Dell,Orto, and Mark Pedelty, professor of communications studies, for showing her the way.

“I had done journalism in high school and was the editor of my senior paper. I loved journalism but I guess I hadn’t considered doing journalism. As it turns out, I fell in love more, because of its potential,” Ramírez said. “I realized I could write about what I wanted to write about: immigration, race, social justice. This is what I wanted to do.”

Ramírez stepped into the professional world by writing for La Prensa, a biweekly Latino publication in the Twin Cities, while attending classes, during a time of great social change for the Latino community. Her interest in social change, justice, and organization grew.

Upon graduation, she went into the honors Ph.D. program in History at Duke University. “I told myself, ‘Let me believe all these people telling me I could be a great professor.’ I learned from the best.”

“I didn’t leave my journalism behind,” she said. “I’m an oral historian, which means I do a lot of interviews with folks. I do life history and trace them, and through my dissertation to the book manuscript I’m working on now.”

The topic? Considering the heterogeneity of Latino, and specifically both indigenous and non-indigenous Mexicans and their migration. She’s also working on a chapter with a colleague for an anthology that asks: When is a migrant a refugee?

“It’s impossible to not consider the things that have been occurring throughout this year, and especially with the movement of folks now, within the work we are writing,” she said. “Writing, for me, while oftentimes painful, seems so critical and urgent in these times, not only to place into context what it is we are witnessing, but also to make sense of it for my own self, to work out the intricacies that hurt and pain me the most.”

Ramírez brings an immediacy to her work, viewing it through the lens of a child of immigrants. When her mother, six months pregnant with Yuridia and carrying Yuridia’s one-year-old brother, crossed the border in San Juan Capistrano, California in 1988, the entire landscape changed for her children. “Everything I do is for my parents—to honor their experiences, to recognize their sacrifices, to celebrate their strength. They are the ones who give me strength, and I feel incredibly responsible to my communities to keep doing the work I do.”

Ramírez says there is a concerted effort in the academic community to become more public intellectuals—out from the Ivory Tower and instead on the streets in pursuit of social justice. That is sometimes through op-eds in newspapers, on social media, or through the type of work she does: oral histories.

“Journalism is about the contemporary moment, but we need to contextualize it, which is what history is all about. They are the perfect coupling of careers,” she said. “I love bringing really important stories to life, through the voice of the actors themselves. I’m writing about super important things—immigration, race, questions of diversity—it just so happened history was a way for me to be able to write and teach about them.”

For a woman who entered college with a perhaps blurry vision of what her life would become, she has built a giant, detailed dream. Her restlessness has been channeled into working toward an ideal future state. “I envision a world through which all migrants are treated with dignity and respect and allowed the opportunity to live prosperous lives, especially in the ancestral lands of indigenous peoples in which we ourselves are visitors,” she says.

“I have never seen myself as just a scholar, or an activist, or the child of immigrants, or a working-class kid, or a Midwesterner, or a person of faith,” she says. “Most critically, I think I am called as a believer to love humanity and fight for justice; in everything I do, I aim to never forget that.” 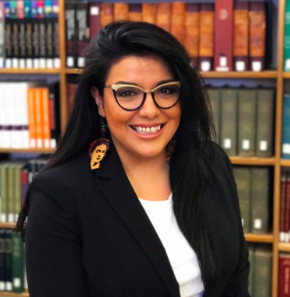