Jamie Yuccas (B.A. ’03) has loved the news for as long as she can remember. When she was in elementary school, her grandfather would pay her two dollars a week if she could pass a current events quiz. She would study up by reading the newspaper all week to earn her prize. “I loved the storytelling of newspapers so much, I started my own called “The Loon Lagoon,” writing stories about the happenings at my family’s cabin on Leech Lake in northern Minnesota.”

That early start led Yuccas to be the first to sign up to work on the newspaper at her high school. “I finally felt like I had a place,” she said of the school newspaper. “I was in band and played sports, but at the newspaper we all had the common goal of telling stories.”

Yuccas entered the University with a portfolio of clips; she knew she wanted to work for the Minnesota Daily. She applied to be a staff writer her freshman year and got the job. During her first year in the journalism school, two of her instructors, Ken Stone and Gary Schwitzer, encouraged her to get an internship at one of the television stations. Yuccas applied to be a weather intern (the only spot available) at WCCO. Her first day was Sept. 11, 2001.

“Watching the news unfold that day, seeing how pictures could be put to words to make the greatest impact on the story really solidified my choice on working in broadcast journalism,” she said. After her weather internship ended, WCCO hired her as a producer’s assistant, working overnight for the station’s brand-new morning show, while still attending school.

With her degree from the journalism school, her internship experience, and a lot of tenacity, she had a job at KTTC in Rochester, Minn., before she even graduated in 2003. She spent 18 months in Rochester before moving to Fort Meyers, Fla., where she worked her way up to anchor. After being there for seven years, including during the recession, she thought that would be a place she should just settle in. Then the news director at WCCO, who remembered Yuccas as a producer’s assistant, came calling. He knew Yuccas might have aspirations for national news, and with WCCO being a CBS owned and operated station, there was a lot of potential for growth.

During her second week at WCCO, Yuccas was sent up to Minot, N.D., to cover a flood. She ended up being on the CBS evening news, reporting from Minot. Over the years at WCCO, she would pitch ideas to CBS - usually weather pieces during the cold Minnesota winters - and ended up reporting two “end pieces” for CBS, which was a rare and valuable opportunity for a reporter at an affiliate. In 2015, she joined CBS News in New York and now works in L.A. as a correspondent.

Last October, Yuccas came back to the University to interview new Gopher women’s basketball coach, Lindsay Whalen. She made time to stop by Murphy Hall to talk to students who are interested in broadcasting. She answered a range of questions about getting an agent, the differences between media markets, being a woman in the industry, and how to keep yourself from becoming desensitized.

She touted the benefits of starting out in a smaller market, where there’s more room to make mistakes and better chance to get to know yourself as a professional. She encouraged students to learn how to do everything in a newsroom. “Don’t ever say you want to be an anchor,” she said. “You need all the other skills in order to anchor anyway. The anchor is the quarterback of the team. You have to know and see the whole field and know everybody’s job to be successful.”

Moving to new markets can be a challenge - and Yuccas has moved a lot. She told students to read all the newspapers in the area and learn what’s important to the community. Watch the newscasts, and learn about the news directors. Sit at a coffee shop and listen to the conversations. Most importantly, she encouraged kindness. Don’t rush sources or push to a deadline. Build a rapport first, and worry about the story second.

Yuccas was honest about the life of a correspondent, too. She’s covered hurricanes, the Pulse nightclub shooting, the California fires and more. It can all take its toll. “All the travel and getting up in the middle of the night for live shots, or being launched to breaking news at a moment’s notice can make planning your own life pretty tough,” she said.

“You just have to remember that what you do matters,” she said. “Your job is to tell people’s stories, expose lies and corruption, and fight for the underdog. You have to have a good sense of self and realize that it’s your job to flip the script on misinformation. The most rewarding part of my job is helping people tell their story.” 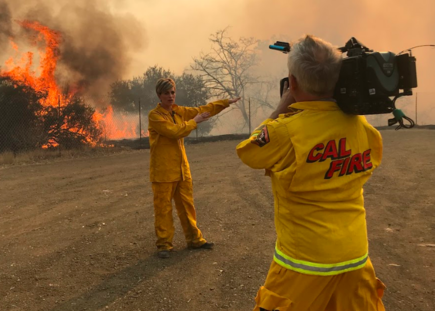