Why I Give: Dave & Julie Lee

The couple created their scholarship in 2010.

Dave Lee is a recognizable force on Twin Cities radio. He’s been with WCCO radio for more than 25 years, and is the long-time host of The Morning News. He’s received Edward R. Murrow awards, Minnesota Associated Press Broadcast awards, and been named Broadcaster of the Year six times over. For 13 years, he worked with University of Minnesota sports doing play-by-play for Gopher football and basketball.

“It was never a chore for me and always fun,” Lee said about his time with Gopher sports. When the gig ended, he thought a nice way to thank the U for the opportunity would be to give back.

The Lees participate in many philanthropic causes, including the Leukemia and Lymphoma Society, the Minnesota Military Family Tribute located at the Capitol, the Masonic Children’s Hospital and Big Brothers and Big Sisters of Minnesota. But education is also close to Dave’s heart. “I was blessed with a mother who was an educator; she was dedicated and selfless and giving,” he said. “It really all started with my parents.”

The Lees worked with the College of Liberal Arts to create the Dave and Julie Lee Scholarship Fund in 2010. Since then, the couple has doubled the gift to help grow the fund. The scholarship is used as a recruiting incentive and provides four years
of financial support to one student. Because Dave Lee is passionate about the industry and helping the next generation of journalists, one of the goals of the gift is that the scholarship will go to an aspiring journalism student. Since it was formed, two HSJMC students have received the scholarship.

“Julie and I want to help students achieve their passion,” Lee said. “For me, that’s what I’ve done all my life [as a broadcaster]. And there is a need for really good journalists out there. When I got in the business it was just newspapers, TV and radio. There may be a stronger calling for talented journalists now more than ever.”

Lee knows journalism is a job that takes passion and drive. The hours may be long, but the job comes with a purpose and a mission, he said. He wants to help support the School, provide opportunities, encourage students and help in any way he can. “When you get a chance to visit with these students–it absolutely solidifies the giving. You leave a meeting with them and think, ‘I think our future is in pretty good hands!” he said. “I’ve been really overwhelmed by the students.”

For the Lees, philanthropy only makes sense, especially as Dave Lee looks back on his life and his career. “When I was younger, I met people along the way who gave back and were instrumental in who I am,” he said. “Hopefully, along the line we will help someone. It’s an opportunity wasted if I don’t take advantage of what I’ve been given.”

“Dave and Julie’s contribution has helped me immensely. I spend a lot of time stressing out about money, especially with a job in journalism. It’s comforting to have a little snippet of a security blanket so I don’t have to worry about paying all that money back through loans. I met Dave and Julie, and they’re both absolutely wonderful people. It was great to talk to them and hear Dave’s story about how he got into journalism, which helped me understand my industry more.” —Olivia Hultgren, recipient of the Dave and Julie Lee Scholarship 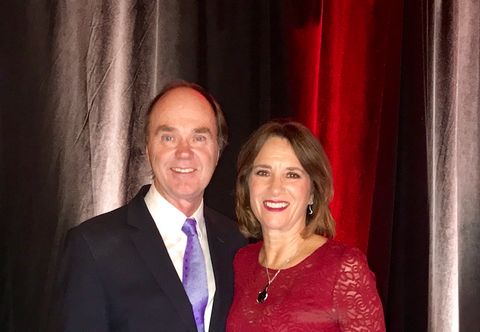