Why We Give: Joel and Laurie Kramer

By giving to HSJMC, the Kramers believe they're supporting democracy.

Joel and Laurie Kramer are known throughout Minnesota for many reasons: Joel for his storied career as editor, then publisher and president at the Star Tribune, then went on to found MinnPost, a pioneering nonprofit digital publication focused on regional news, with his wife, Laurie. Laurie has done it all in the nonprofit sector, writing, editing, marketing, membership, and fundraising for giants such as the Guggenheim, the Consumers Union, and Jewish Community Centers in Buffalo, New York, and St. Paul. She also was recognized as one of Blue Cross Blue Shield’s Champions of Health for her founding of the Mental Health Education Project. She received her master’s degree in public health from the University of Minnesota in 2001.

They talked to the Murphy Reporter about why they give.

On having a philanthropic philosophy

The Kramers are part of the 1 Percent Club, which means they are committed to giving 1 percent of their income to charitable causes. They also serve on many different nonprofit boards.

Joel: These were all causes because of either our own careers, or careers of children or interests we have in community. We also donate to what I would call social things – work on social justice in the community.

On connecting journalism and philanthropy

Joel: When I left the Star Tribune, I never associated journalism and philanthropy, except for journalism schools. But when Laurie and I cofounded MinnPost in 2007, we adopted a business model that was heavily dependent on philanthropy.
Laurie led that part of that effort and is the person most responsible for raising money over those years. It was exciting to combine those two things, and MinnPost has been reasonably successful. All media that deal in serious issues have a lot of economic challenges. It’s not an easy business, for-profit or nonprofit, but we were able to get thousands of donors to support the work.

On giving to the next generation of journalists

Joel: It was a lot of fun to get to work with next generation of journalists. Also, it’s interesting that there are still so many people who want to go into journalism, even though it’s more difficult to sustain as a career than it used to be. I’ve been very impressed with the students. They are very good reporters, worked hard, wrote well, and we were impressed with how well prepared they were.

Joel: Every organization that gets philanthropic money will say, “Every gift counts.” Not only the dollars, but the show of support. First of all, institutions can do a lot with small amounts of money. Second, when they go after foundations, grants, or talk to major donors, they go right to talking about how many small donors you have.

Laurie: I was at a big annual mental health conference—and we raise money for it—and some people give thousands, and one person sends in a money order for a dollar. To that person who sends the money order—because she doesn’t have a checking account—that dollar is important emotionally, and I know how important it was to make the gift. Whatever your level of means, it makes you feel good and us feel good to give. Nothing is too small, to make a contribution.

On the importance of supporting journalism now

Joel: I give some talks on what I call the “senior citizen circuit.” I get invited, mostly by word of mouth, to talk about President Trump and our democracy. I don’t really talk so much about Trump, but more about the pillars of our democracy and examine how well they are holding up. One pillar is journalism. Others are courts, Congress, federalism, civil liberties organizations like ACLU and Planned Parenthood. In general, these institutions are holding up pretty well, but the stress is enormous, and we should not take these things for granted. They are fragile. I think that journalism and our civil society are very much worth people’s support … We’re supporting democracy. 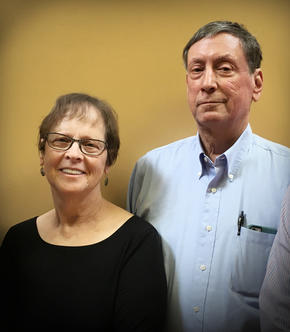