How does corporate social responsibility (CSR) contribute to society beyond reputational and financial benefits through maximizing co-created and shared value? 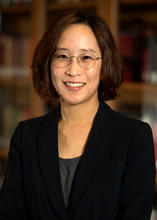 Associate Professor Hyejoon Rim researches CSR effects and how corporations can better manage and communicate their CSR initiatives to leverage public engagement. “This is important because CSR practices are often perceived as hypocritical, and audiences remain skeptical of CSR, which limits public engagement,” she said.

During the past years, Rim has developed a programmatic line of research investigating barriers, motivators, and strategic factors influencing CSR effectiveness. She examined these effects for both corporations and for their nonprofit partners, in both crisis and non-crisis contexts, in both the U.S. and abroad, and in traditional and in social media.

According to Rim, scholars and practitioners have emphasized the importance of transparency in corporate communication, as it may mitigate public skepticism. Meanwhile, the potential positive or negative impact of delivering negative performance information has remained an unanswered question. Using an experimental design, with her co-authors, Rim examined effects of transparency signaling on two dimensions of trust - competence and integrity - and how they further influence a public’s evaluation of company reputation. The findings showed that high transparency signaling led to higher perceived integrity, but there were no significant effects on perceived competence and company reputation, she said.

To understand the societal context embedded in defining CSR, Rim also explored how public prioritization of business responsibility and skepticism towards CSR differ in three countries: the United States, the United Arab Emirates, and South Korea. Her findings shed light on the role of public trust in government and business in shaping the definition of CSR. Related to this, her current work centers on investigating the state of CSR communication and how corporations set CSR agendas in these regions. Using a computer-aided content analysis program, she measured transparency signaling scores in CSR disclosures. “The study found that the level of transparency in CSR reporting is different by countries, even among the world’s largest corporations,” she said. “The variances in transparency signaling provided evidence that CSR practices and communication efforts have been shaped by institutional and stakeholders’ expectations.”

Rim’s ongoing research focuses on corporate social advocacy (CSA), which lies at the intersection between CSR and strategic issue management. Publics increasingly demand that corporations express their positions on social-political issues. Yet, when companies take sides on controversial issues, publics engage in collective action that further fuels polarized opinions. Rim recently examined a network structure to understand how publics mobilize and establish relationships in social media when firms get involved in hot-button issues, and identified unique characteristics in the boycotters’ networks. Rim examined what motivates publics to engage in social movements (e.g., brand boycotting or advocating) and her research continues to explore opportunities and challenges that CSA and digital technology provide to public relations practices and scholarship.